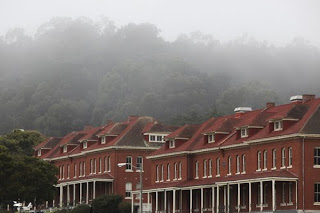 Thanks to this years Guild of Bookworkers show, TALAS had a fantastic excuse to head west and to spend some time in San Francisco last week.

But before the show began,
we had the opportunity to visit some customers…

Day 1:
Straight from the plane, we made our first port of call at the San Francisco Airport Museum, which just so happens to be conveniently located at the airport itself!
The museum is fascinating, with shows which range from pottery, to baseball, to trains – and pretty much everything else in between. They were even refurbishing some antique pinball & slot machines during our visit for an upcoming exhibition.

Here Aaron and Ken from the museum talk shop in front of a hanging piece of tyvek. And to the right, we see a JAL (Japanese Airlines) model which just arrived from overseas – still in its proper shipping crate, ethafoam plank and all!

Day 2:
The next morning we started things off at the San Francisco Public Library conservation workshop. This place is full of all types of goodies – materials, machinery, handy tools, and naturally: books!Conservation of the libraries collection can be anything ranging from the simple tipping in of pages to full-blown rebinding and extreme restoration in certain cases. It was fascinating to see the various techniques employed at this facility, and to have the chance to go behind the scenes!

Next stop: the brand new Walt Disney Family Museum which only just opened October 1st!
And in keeping with all over Disney ventures, this museum did not fail to impress. Constructed in a former military bunker, this museum has certainly carved its own identity within its brick facade.
But, do not be fooled by the pristine condition of the museum & artifacts within, as a ton of conservation work has been completed by highly experienced & talented conservators to get things to look the way they do at this museum.Day 3:
Our third, and last day of museum visits began with a visit to the Paper Conservation lab at the Legion of Honor. Once again, we were extremely impressed by this museum’s impressive lab, and behind the scenes facility. Unfortunately I do not have any images from this lab, but it was nothing short of pristine. Plus, I had the opportunity to hold a Rembrandt drawing – so things couldn’t really get much better in my point of view! But believe it or not, they did, as the museum’s organs were being played for a special event, and we had the pleasure of listening while perusing the museum’s collection!

Next stop, the de Young Museum – home of the Textile Conservation, Painting Conservation, and Object Conservation labs. Yet again these labs did not fail to impress, with giant windows framing the gorgeous San Franciscan landscape, and not to mention state of the art equipment.All of these labs were particularly interesting in how they each use the materials in which we supply in such different manors and to perform different functions.

Thanks again to all of the museums for letting us come visit. It was greatly informative for both Aaron and me, and we hope to be back soon!

Next stop… the Guild of Bookworkers!