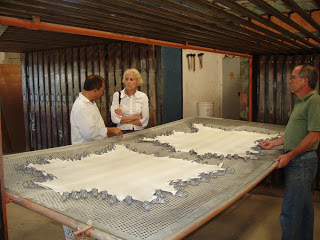 As Talas shut their doors for the summer holidays, Marge & Jake took a trip down south of the equator to visit some of our customers & suppliers in Brazil.
Marge & Jake are lovers of all things South American, and were excited to see some of our supplies in use first hand!
First on the agenda was a visit to the National Library of Brazil in Rio. It was here that they finally put a face to the voice of Tatiana, the Chief Conservator at the library. She was very kind & welcoming and took the couple on an extensive tour of their facilities in addition to around the city of Rio.

Jake & Tatiana in Rio
After spending some time with Tatiana, it was on to the National Archives of Brazil! The archives have been in the process of moving to a new facility, and Marge & Jake were lucky enough to have a tour of both the old and the new! Once again, they were very impressed by the type of work being done in these facilities, and were welcomed ever so warmly.

Unfortunately for us, Marge & Jake prefer to treasure these expeditions without any sort of documentation, and as a result… there are no pictures to vouch for these visits!

On the contrary, this next visit was very well documented. This visit took place in a small city north of Rio. It was here where Marge & Jake visited with one of our South American vellum & parchment suppliers.
This small family run business (not too dissimilar fromTalas) took Marge & Jake through the whole process from preserved hide to finished parchment. The road to completion is a rather laborious one beginning with cleaning the skins, to the liming of the skins (to reduce the acidity from their preservation in various materials & thus to ensure their longevity), to the stretching & de-meating of the skins, and finally onto the drying and cutting stages.

Marge in the factory with J.J. (in the white shirt) & Pedro (in the green shirt).

Here Marge discusses the characteristics of the parchments with J.J. & Pedro. Dating back to her traditional training as a calligrapher & working on parchment, Marge is extremely knowledgeable when it comes to this medium.

The love for these materials is mutual and J.J. & Pedro seemed to have really enjoyed talking parchments with Marge during their visit.

After the visit, the four went for a lunch, the highlight of Jake’s afternoon! Not that he’s not interested in parchments himself… but he has a certain fondness, or rather obsession, for food exploration. That being said, J.J. & Pedro were thrilled to introduce Marge & Jake to the famous traditional dish of the region, which they all shared over lunch!

After their visits, Marge & Jake spent a few more days in Brazil exploring the country on their own before it was back to work in New York! One week never seems like long enough, does it?